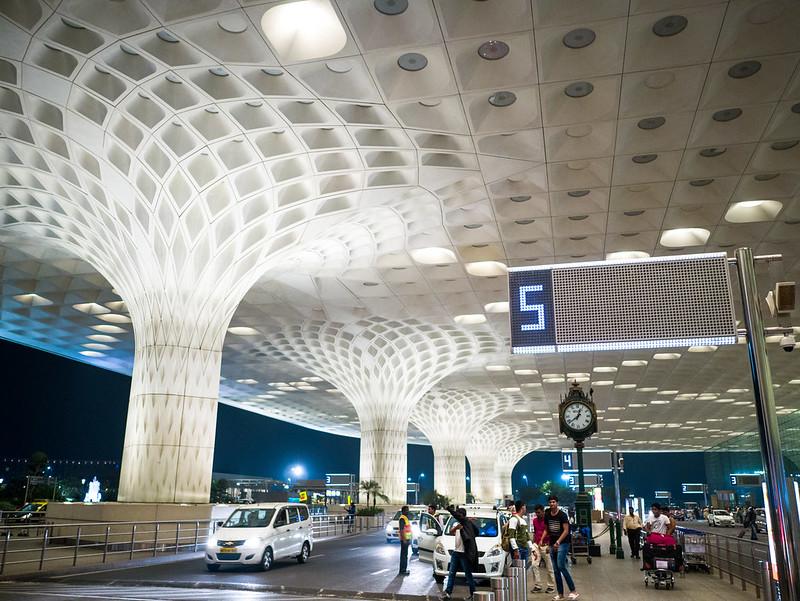 The Chhatrapati Shivaji International Airport has two main terminals: Terminal 1 dedicated for domestic flights and Terminal 2  which is dedicated for International flights. Although both terminals share airside facilities they are physically by the landside and require passengers on connecting flights to take a 15 to 20 shuttle service when commuting in-between terminals.

The airport has a total of five operational terminals handling more than 780 aircraft movements daily setting a record with handling over 51 movements within one hour in 2014.

Terminal 2 which was rebuilt in January 2014 by the GVK-led consortium now spreads over an area of 1,400 acres and consists of 76 migration counters for incoming passenger, 60 immigration counters for departing fliers, 161 elevator and 208 check-in counters. 2,300 CCTV cameras, automatic baggage system and 4,100 public address speakers. The T2 terminal as well has a dedicated 6-lane elevated expressway, as well as a transit and day hotel.

The airport’s Air Cargo Complex located west of T2 has been in use since 1977 and has a cargo apron which can handle five wide-bodied aircrafts as well as over 380.000  metric tons of International Cargo and more than 160,000 metric tons of Domestic Cargo.

T2 has one the largest airport art collections in the world stretching for more than 3-km art wall that displays  and over 7,000 artifacts that represent a compilation of works from more than 1,500 renown artists throughout India. The exhibits which are displayed on walls over 5 meters high has been recognized as “India’s largest museum”.

The airport has two transverse runways which have been upgraded to Code F to facilitate the handling of much larger aircraft such as the Airbus A320. Both the airport’s runways were operated simultaneously in an effort to reduce congestion at the airport during peak hours and facilitate a set target of 48 aircraft movements per hour. However in 2013 the airport abandoned its simultaneous Cross-runway flights in favor of single runway operations which was found to increase aircraft movement.

Located in a section of the parking area opposite Terminal 1B stands India’s tallest Air Traffic Control Tower. The triangular three-dimensional 279 ft structure won the Hong Kong Building Information Award in 2009 and was inaugurated in 2013 taking over operations in January 2014.

ATMs plus bureau de change services are accessible all through both terminals.

Communication:
Wi-Fi internet access is obtainable free of charge all through the terminal buildings. Telecommunications centers, offering telephone, fax, internet, plus photocopying services, are also situated in both terminals.

This Mumbaiwebcam shows the quiet and peaceful eastern suburb of Chembur located 14.3 km (44 min) south of the Ccatrapati Shivaji International Airport. Goathan which occupies 37,000 Sq. meters and has a population of 2500 residents many of whom are descendants of original settlers is one of the oldest villages established over 300 years ago.