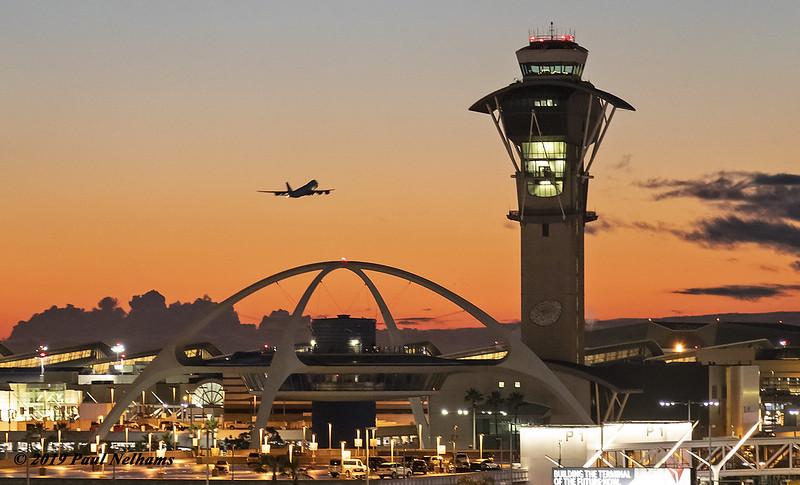 Located in Southern California, Los Angeles population was calculated at 3,792,621 in 2010 after a study was done by the U.S Census. The Los Angeles International Airport (also known as the LAX or IATA) is located in the SW area of the LA.

The video featured below was taken mid-flight approximately 5 minutes before the aircraft landed at the Los Angeles “LAX” Airport, which is 16 miles from the Los Angeles downtown area. The airport has also been placed as one of the top five airports that cater to both cargo traffic and passengers in the United States.

In the year 2012 a total of 63,688,121 passengers used the airport to travel to various locations ranking, the LAX the world’s 6th busiest airport. This increased by 3 percent of travelers from the previous year.  There are over forty other airports throughout the Los Angeles area. Los Angeles itself was founded by, and then time Spanish governor Felipe de Neve on September 4, 1781.

The  video below features numerous aircrafts such as the Air Tahiti Nui, Trans Canada Air Lines, Star Alliance, and Amerka West. A two lane road can be seen a different parts of the video.

The LAX cargo flights exceed over one thousand per day.  Passenger’s use of the airport has earned the LAX the sixth place ranking for the world’s busiest airport. The airport also is number thirteen for the most air cargo measured in tonnage that is handled.  In 2008 95% of cargo traffic and international passengers began or ended their trips in various areas in Southern California.

The video is overlooking Runway 25 which is considered as Cargo City. The camera footage is positioned to the right at the Los Angeles International Airport. Planes can be seen arriving and departing from the runway.

Downtown Los Angeles is 15 miles away if traveling via the Wilshire Blvd to Santa Monica Beach from the Pacific Ocean. Consisting of saline water the Pacific Ocean is the world’s largest oceans covering over 63 million square miles. Spanish explorer Vasco Núñez de Balboa was first to announce the viewing of the Ocean. This took place sometime in the early 16th century.

The camera view featured in the link below is of Runway 25 to the right at the Los Angeles International Airport across from the pacific. Planes can also be seen traveling on the runway.

Interstate 105 is located east-west of the LAX in the southern region of Los Angeles county, California. The Los Angeles International Airport can be accessed via exit 1D/Nash Street. Originally the freeway served as El Segundo control city in its western region. Over time signs which read El Segundo were replaced with LAX Airport signs. The highway empty space has been utilized by filmmakers to create movies like Speed which was filmed in 1994.

The link below features aerial views of the Los Angeles Airport as well as an adjacent highway with four lanes going in both directions.

Named after the then time Mayor Tom Bradley whom was in office in the 1980’s, The Tom Bradley International Terminal officially opened on June 11, 1984.

The below link features close up views of the Tom Bradley International Terminal which is terminal number 9 of the LAX airport. The terminal cost $123 million to build and is 963,000 square feet.

The terminal has have some maintenance work performed since its opening which included 503 million dollars of improvements to items such as the paging system, air conditioners, elevators and digital signs . In 2007 the LA City Council approved the construction of a new ten gate terminal. This terminal would to designate to process international flights utilizing the Airbus A380.

Interstate 5 is located on the west coast of Los Angeles and is considered as the main interstate highway.  State Route 2 is a three segment state highway which is also referred as the Angeles Crest Scenic Byway.  The highway is considered to be part of the California Freeway and Expressway System.

The web camera footage below features multiple lanes of traffic traveling in both directions on I-5 South at SR-2. The highway runs parallel to the Pacific Ocean and from Santa Monica traveling on SR 1 south the Lax Airport can be accessed via Lincoln Boulevard.