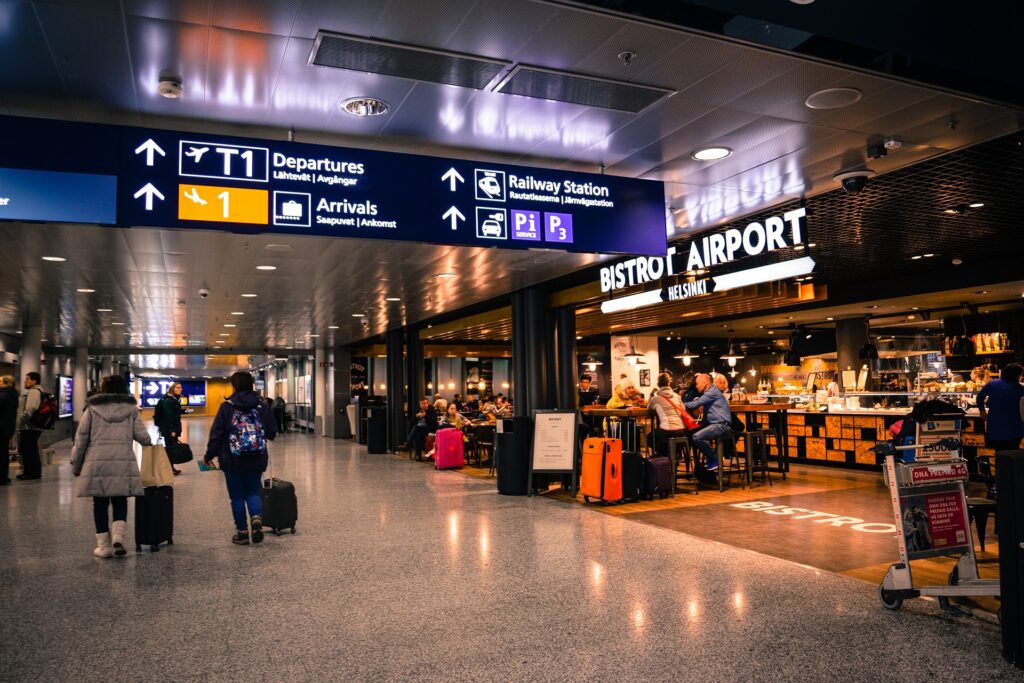 As a city which is widely appreciated and enjoyed by visitors as a friendly and welcoming place, Helsinki has long been a place of great travel and enjoyment for various reasons.

Not only is the city a location that interests people from all walks of life but it is also a location that does a great deal for Finnish culture and overall progression. To get into the city of Helsinki, you tend to have to fly there – Helsinki Airport is the definitive way in.

For more information about the airport itself you can check out the official Helsinki Airport website.

As the main international airport for the entire metropolitan region of Helsinki and the whole of Finland in general, this awesome airport sees major levels of travel and has done ever since it was first opened in 1952.

The airport sees around 16m passengers head through it on an annual basis, serving as a major hub for the Finnair flag carrier as well as serving as a major base for other Scandinavian locations. The likes of Blue1, Norwegian Air Shuttle and Nordic Regional Airlines all make regular use of this system throughout the year.

Despite being named Helsinki Airport, though, the airport itself is based in the city of Vantaa around 3 miles west of Tikkurila. This is just north of Helsinki city centre, though, making it a really common place to begin travels and questions about the region.

The airport, though, also has a rich and famous history as a leader in the long-haul and transfer points across Northern Europe. For this reason it plays a significant role within the success of trade within this part of the continent, acting as a major hub for more than just one reason.

This has made sure that the airport retains a major level of importance even as the world continues to globalize. Even if Helsinki is not the perfect idea for some as the kind of place you would like to travel and visit for a holiday, it’s a massive part of the cargo industry throughout Europe and has been on the growth for many years.

Serving so many different aviation firms and companies only continues to strengthen the point that Helsinki Airport is a major hub of travel, accommodation and much more throughout the year.

The airport itself is fairly simple for something so immense – it was first built to help deal with the 1952 Olympics in the city and therefore it has become a major source of pride for the nation. More importantly, though, it now serves as the fourth most important airport in the Nordic region with just short of 16m passengers heading through on an annual basis.

This makes it capable of handling around 80% of the total flights leaving the airport – this is done by making sure that the airport provides all the space that it could possibly need. With three runways all made from asphalt and detailing 3,500, 3,060 and 2,901m in length respectively, the airport is more than capable of dealing with a considerable load of passengers at any given time.

The airport is considerable in size for a reason; it provides around 20,000 jobs within the area with over 1,000 companies operating within the region to offer a massive level of commercial opportunity for those willing to put in the time. This makes it very easy to enjoy the airport as you have major choices of places to see and shops to visit whilst you wait around.

If you would like to know more about how the airport handles itself and deals with a massive range of customers at any given time, you should watch the above video. This does an excellent job of selling the story of the airport and also helping you get around the place if it is ever your first time coming to visit.

As far as being a tour guide goes, there are few better solutions to enjoy than this video.

Another major factor of what makes the airport so important is how easy it is to get information about – the airport can be viewed at all times if you just check out this easy to use Helsinki Airport flight tracker.

Ever wonder what Helsinki Airport looks like when you aren’t there? Looking to do a bit of touring around before you actually come and see the airport? Not to worry. With this excellent Helsinki Airport webcam, you can do just that! You’ll not only get to enjoy a magnificently created webcam angle to let you scope the whole place out but you’ll have access to plenty of gratifying views to help you understand where certain parts of the airport may be.

Make sure that you take a genuine and full view of this wonderful city by using this Helsinki view from the Cirrus building. Now you can see the city below you change and adapt with the passing of time giving you a fine view of a wonderful city.

For sightseers as much as those who are wanting to come and visit the city, this is a marvellous tool that will certainly make your life easier as you move forward, giving you a refreshing and enjoyable angle of a very particular part of the city taken from an excellent angle.

One of the best views of the city of Helsinki, though, comes from the South Harbour webcam view. This lets you see a thriving part of the city unfold around you as time goes on, letting you see what people get up to at various points of the day at this thriving hotspot. The main reason that you want to check this out, though, is so that you can see the numerous activities that takes place here so that you can arrange the best time to come on down and see what all the fuss is about in this great part of the city.