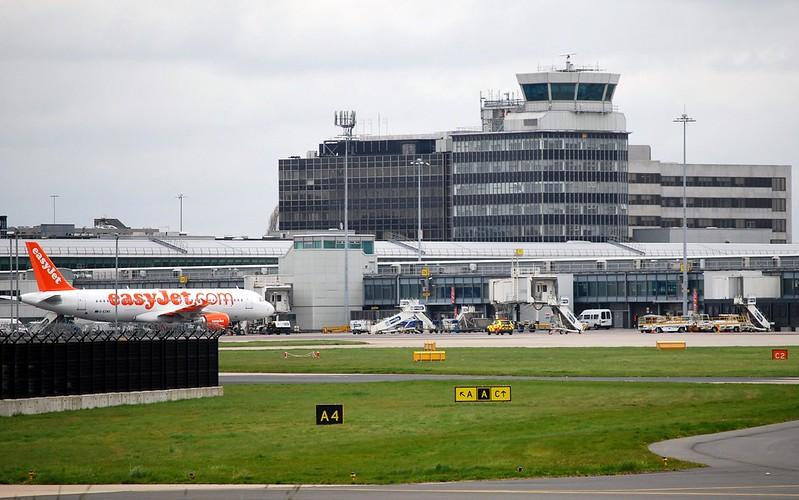 The Manchester Airport can be found 7.5 nautical miles southwest of Manchester city centre. The airport is located in Ringway, Manchester, England.

The international airport was voted third busiest airport in the United Kingdom in terms of passenger traffic in 2014.

It regularly handled flights to approximately 225 destinations worldwide. The Manchester Airports Group, or MAG, the holding company, owns and operates the airport. MAG is owned by the ten metropolitan borough councils of Greater Manchester. Manchester City Council owns the largest stake, and MAG is also owned by the Australian finance house IFM .

Ringway, where the airport is situated, is a small village with a few buildings including a church which sits at the southern part of the airport. In 2013 the Manchester Airport handled 20.8 million passengers. Spare capacity allows the airport to handle as many as 50 million passengers on a yearly basis, but because the airport can only handle up to 61 airport movements in a given hour it is slightly more limited.

To visit the official website of Manchester Airport and book a flight or access any other information.

Construction of the airport began in November 1935. At this early date the airport was not known as the Manchester Airport but the Ringway Airport. It was partly opened in 1937 but it wasn’t fully opened until a year later.

During the years of World War II the airport played an important role as the Royal Air Force’s base RAF Runway. Not only did the airport produce military aircrafts, it also trained parachutists.

Once World War II came to an end the airport was once again used as a civilian airport. Over time it expanded and developed to its present size and modern standards. After the war it was also the busiest airport after London Heathrow for some decades.

The M65 motorway opened to the airport in 1972 and the railway station was open by the year 1993. There were many protesters when a second runway was built from 1997-2001.

From 2010-2030 Manchester Airport is undergoing construction and working on expansion plans. The airport developed and published its Master Plan as part of the government’s “The Future of Air Transport” White Paper.

The airport will turn unused land and old outdated areas—which will be torn down in many cases—into car parking, offices, hotels, and more. Not only will the airport’s expansion help it to keep up with the growing demand of travelers it will also help to create more businesses and jobs.

The Manchester Airport has three different terminals. Terminals 1 and 2 are connected to the skylink and there are also travelators. Terminal 3, on the other hand, is connected to terminal 1 and the skylink. The skylink opened in 1997 and it also links terminals to the Radisson BLU Hotel and the airport railway station complex.

The first terminal has scheduled and charter operations. Flights from Terminal 1 go to other places in Europe as well as locations around the world. The second terminal is generally used by a number of different airlines.

This link to the Manchester Airport map will send you to a map of Terminal 1, but the website will have maps of the other two terminals.

In the video linked above Ben Foden gives a video tour of the Manchester Airport. He sites some additional information about the airport and gives viewers and travelers a glimpse inside its walls.

Have you ever wondered what was going on right that moment in a city or place you had never been? Maybe you have thought of the same question even though you had been there, but you weren’t at the time.

When you use webcams you can see exactly what’s happening almost anyplace around the world at any time. If Manchester Airport is a place that interests you for one reason or another here are some webcams for you to enjoy.

This is a webcam of the City Airport & Helicopter airfield located in Eccles, Manchester. The airport it smaller than the Manchester Airport but it is nearby.

Here is a great camera to view the weather in Manchester. It is a weather webcam and it is regularly updated with new pictures.

Another weather webcam of Manchester can be found. This one takes a look at downtown Manchester.

This webcam is situated at the University of Manchester and it should update every 30 seconds. Undergraduates use this telescope in order to study emission neutral atomic hydrogen in the Milky Way as well as neighboring galaxies.

The Jodrell Bank Center for Astrophysics is among the largest astrophysics groups in the UK. For those who love astronomy and astrophysics this is one of the best places to be.

The webcam is situated looking at the Oxford Road towards the Central Library. The webcam should update every five minutes. Manchester city centre is the central business district of Manchester, England.

Manchester itself is a city and metropolitan borough located in Greater Manchester, England. It is in the UK’s second most populous urban area. Manchester is a location what is very rich in ancient history and beautiful sights.