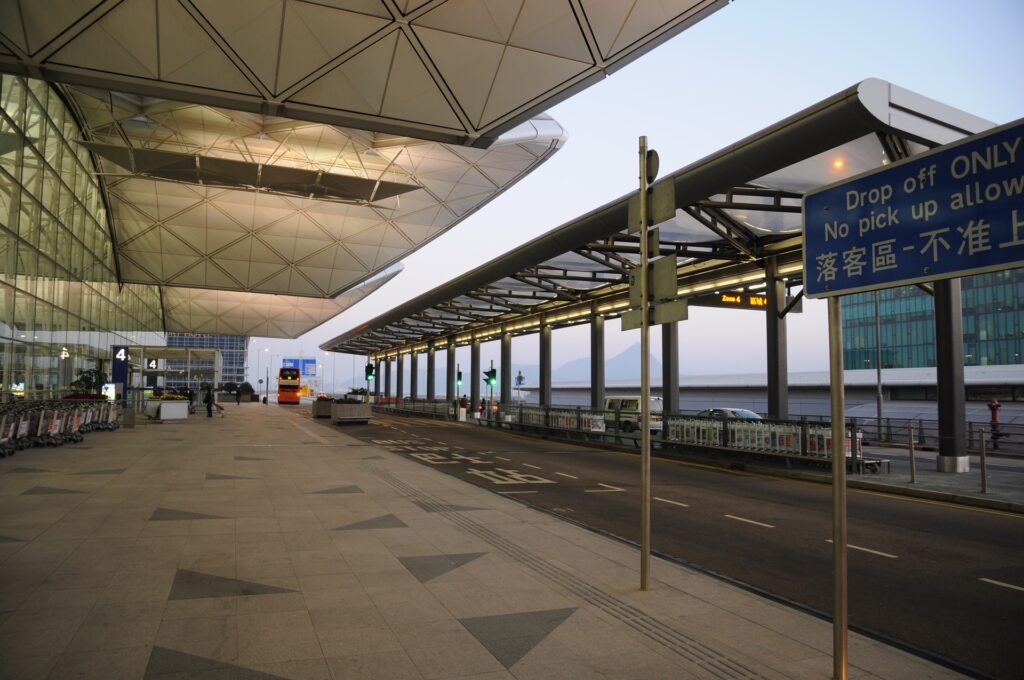 One of the world’s busiest cargo and passenger airports and Hong Kong’s primary airport the Hong Kong International Airport also known as the Chek Lap Kok Airport is located on the island of Chek Lap Kok consisted mainly of previously reclaimed land space for the sole purpose of building the airport.

Initially the Chek Lap Kok Airport was planned as a successor to the closed Kai Tak Airport built in the year 1925. The Kai Tak Airport prior to its closure was located in a densely populated district known as Kowloon City and contained no more than a single runway stretching out towards the Kowloon Bay. The Kai Tak Airport by the early 1990’s had evolved into one of the most hectic airports within the region. Limited in its architectural design the airport quickly surpassed its initial cargo capability and annual passenger expectancy potential primarily due to unavailable space for aircrafts, arrival and departure gates and the lack of a secondary runway to accommodate additional flights, resulting in both cancellations and delays in of one out of every three of flights.

The Public Works departments today known as the Development Bureau along with the Civil Aviation Department of Hong Kong in a planned study conducted in 1974 jointly recognized the small island of Chek Lap Kok located off the largest island in Honk Kong Lantau Island as an ideal replacement location for the possible construction of a new airport.

This site according to the study was suitable in its location at a distance from the packed city centre, allowing the routing of flight paths over the South China Sea instead of heavily populated areas which would allow the airport to facilitate a 24 hour operation of numerous runways. Towards the closing of 1982 and 1983, the engineering study and main plan for  the Chek Lap Kok airport was completed. However the government in February of 1983 due to economic and financial reasons postponed the scheduled project.

On December 1989, six years later the Port and Airport Development Strategy Study spearheaded by the employee-owned multidisciplinary group Mott macDonald headquartered in the United Kingdom forecasted both the port and airport traffic to year 2011 and in their conclusion recommended three possible tactics for the planned development of Hong Kong.

These strategies included one maintaining the current airport located at Kai Tak, two the possible construction of a new airport in the Western Harbor in-between Honk Kong and the Lantau Island, and three the continuation of the already proposed airport on the island of Chek Lap Kok. Subsequently in 1991 construction of the new airport on the island of Chek Lap Kok began. During this construction period in a signed agreement with the government of China, it was decided that the majority of the scheduled work should be completed prior to the July 1997 date marking the handover of the airport facility to China.

The Hong Kong International Airport after experiencing a construction period of  six years and said to have cost over US$20 billion landed its first commercial flight, Cathay Pacific flight 889 at 6:25 am on July 6th 1998 when the Airport opened one week later after the opening of the Kuala Lumpur International Airport.

▪       The Honk Kong International Airport was constructed on a large man made island built by flattening the Lam Chau and Chek Lap Kok islands reclaiming a section of adjacent land previously used by the sea increasing the previously surface area by almost 1% affixed to the northern region of the Lantau Island close to one of the latest generations of government developed areas known as Tung Chung.

▪       The Hong Kong International Airport since 1998 has been operated commercially as a suitable replacement to the closed Kai Tak Airport and recognized as not only a central point for passengers but also a significant region for trans-shipment as well as a port of call for over 44 known destinations within China and the Asian continent.

▪       The Hong Kong International Airport today is the 11th busiest airport in the world by passenger traffic handling over 59.9 million passenger in 2013 and the world’s most busiest airport by cargo traffic contributing vastly to economy of Hong Kong.

▪       Hong Kong International Airport consists of a total of 66 boarding gates and jet bridge gates and seven virtual gates primarily used as a central hub for departing passengers to be transported to waiting aircrafts by apron buses.

▪       The Hong Kong Airport Authority in 2010 disclosed their future plans to develop the extensive midfield location of the airport including the construction of a 20 gate passenger foyer to be completed in the year 2020.