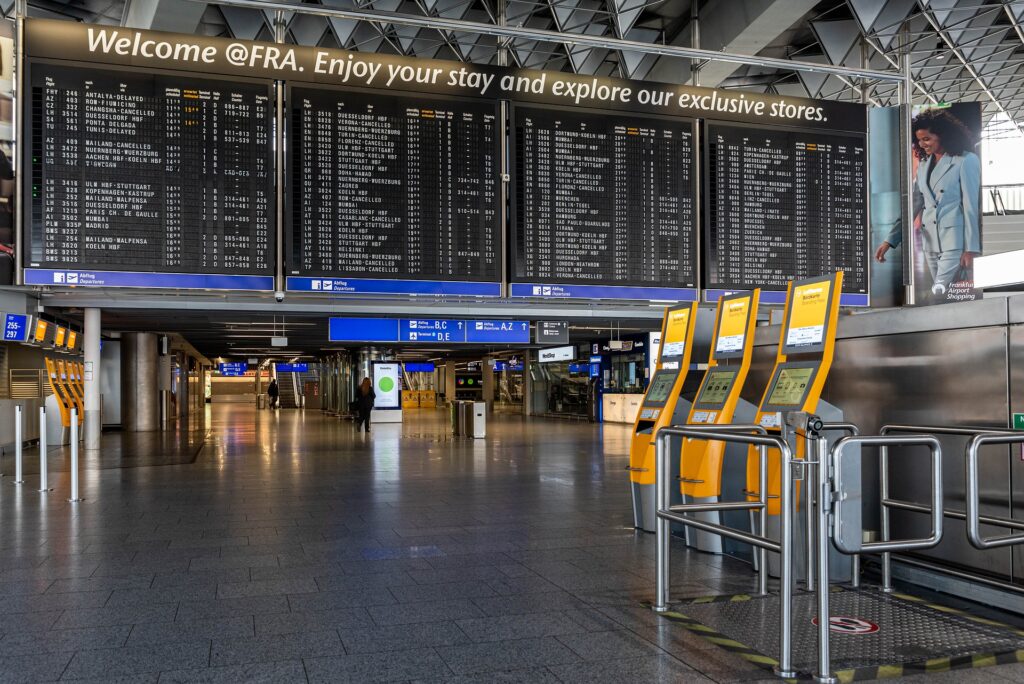 The Frankfurt Airport often referred to as the Rhien-Main-Flughafen located in Germany’s fifth-largest city Frankfurt is recognized as a major international airport and one of the world’s leading commercial centers.

The airport which is operated and maintained by the German transport company Fraport AG Frankfurt Airport Services Worldwide commonly referred to as Fraport acts as the primary hub for the German flag carrier Deutsche Lufthansa, as well as Lufthansa CityLine, Lufthansa Cargo, the joint venture German cargo airline AeroLogic and Condor Flugdienst .

The Frankfurt Airport today is recognized as Germany’s busiest airport with the most international destinations across the globe with respect to passenger and cargo traffic, serving over 264 destinations in more than 113 countries with approximately 1,367 flights per day.

In 2013 the Frankfurt Airport was ranked third among the busiest airports throughout the Europe next to the London’s Heathrow Airport and the France’s Paris-Charles de Gaulle Airport and noted as the tenth busiest airport in the world.

▪  The southern section of the Frankfurt Airport grounds from 1947 served as the major airbase for the United States (Rhein-Main Air Base) up until the acquisition of the property by Fraport in 2005 which resulted in the closure of the air base.

▪  Frankfurt Airport which is centrally located within Germany’s second-largest metropolitan region Rhine-Main serves as a primary transportation hub for accessing the popular locations such as Stuttgart, Cologne and the Ruhr Area.

▪  The Frankfurt Airport which lies 7.5 miles southwest of central Frankfurt, close to the Frankfurter Kruez Autobahn intersection covers an area of 8.1 square miles. The airport featuring four runways, a number of extensive logistics facilities and two passenger terminals handles a capacity of over 64 million passengers every year.

▪  Frankfurt Airport contains two main passenger terminals Terminal 1 and Terminal 2 in addition to a much smaller and exclusive First Class Terminal operated solely by the German flag carrier Lufthansa. Contrary to other international airports, Frankfurt Airport terminal operations are prioritized for selective airlines and airline alliances rather than categorized according to long-haul or domestic routes.

▪  The grounds of the Frankfurt Airport and the surrounding area serve as a central hub for a variety of on-airport franchises as well as a number of airport-related businesses such as, car parks, shopping malls, hotels including the Sheraton Hotel adjacent to Terminal 1 offering 1,008 guest rooms, office facilities, supermarkets, restaurants and a conference center.

This webcam positioned South-west at the Heli Transair helipads of the Frankfurt Airport features a clear view of airport runway 09/27. Visitors to their website can watch this live broadcast by clicking on the link posted below.

South-east of the Frankfurt Airport situated in the Frankfurt Rhein-Main Region in Hessen, Germany is the town of Morfelden-Walldorf.

This webcam made available by Hyper Tours Germany features a view form the Nordenstrasse(old industrial area) on the Aschaffenburgerstrasse. By visiting the link posted below you’ll be able to catch a glimpse of a number of flights arriving and departing from the Frankfurt Airport.